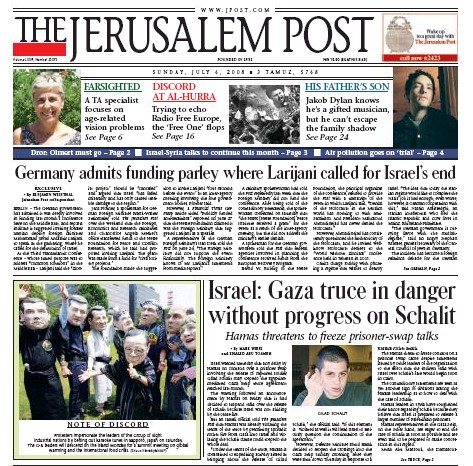 The German government has admitted it was deeply involved in funding last month’s conference here on the Middle East, and reports indicate it suggested inviting former Iranian deputy foreign minister Muhammad Javad Ardashir Larijani to speak at the gathering, where he called for the destruction of Israel.

At the Third Transatlantic Conference – whose stated purpose was to address „common solutions“ in the Middle East – Larijani said the „Zionist project“ should be „canceled“ and argued that Israel „has failed miserably and has only caused terrible damage to the region.“

Jens Plötner, a spokesman for German Foreign Minister Frank-Walter Steinmeier, told The Jerusalem Post over the weekend that the Foreign, Economics and Research ministries and Chancellor Angela Merkel’s office transferred funds to the Hesse Foundation for Peace and Conflict Research, which he said had proposed inviting Larijani. The grant was made from a fund for „civil society projects.“

The foundation made the suggestion to invite Larijani „four months before the event“ at an inter-agency meeting involving the four government bodies, Plotner said.

However, a Financial Times Germany article titled „Publicly funded anti-Semitism“ reported on June 27 that the Hesse Foundation claimed it was the Foreign Ministry that suggested Larijani as a speaker.

A ministry spokeswoman had told the Post repeatedly last week that the Foreign Ministry did not fund the conference. After being told of the contradictory statements, the spokeswoman confirmed on Saturday that „the HSFK [Hesse Foundation] Peace Institute received a grant“ for the event as a result of the inter-agency meeting, but she did not address the ministry’s earlier denials.

A spokesman for the German government told the Post that federal agencies involved in planning the conference received funds from the European Recovery Program.

Bernd W. Kubbig of the Hesse Foundation, the principal organizer of the conference, refused to provide the Post with a transcript of the event in which Larijani said, „Denial of the Holocaust in the Muslim world has nothing to with anti-Semitism. And President Mahmoud Ahmadinejad has never denied the Holocaust.“

However, Ahmadinejad has consistently questioned the authenticity of the Holocaust, and he invited well-know Holocaust deniers to the „World without Zionism“ conference held in Teheran in 2005.

Critics charge Kubbig with placating a regime that wishes to destroy Israel. „The idea that today the Iranian regime would like to complete the Nazis‘ job is bad enough; even worse, however, is German cooperation with this,“ said Nasrin Amirsedghi, an Iranian intellectual who fled the Islamic Republic and now lives in Mainz, Rhineland-Palatinate.

„The German government is currying favor with the mullah-regime,“ said an angry Stephan Kramer, general secretary of the Central Council of Jews in Germany.

The incident has become a foreign relations debacle for the German government. According to critics, it appears to be the first government-funded event in Germany since WWII in which the government sponsored a speaker who advocated a second Holocaust against Jews. The Simon Wiesenthal Center in Europe demanded Steinmeier’s „public condemnation“ of Larijani’s statements and an „investigation and disciplining of those responsible for the invitations and funding of this scandalous encounter.“

The Wiesenthal Center also called for Steinmeier’s support for the Justice Ministry to commence „criminal proceedings against Larijani for his violation of German law against offending the memory of the Holocaust.“

Plötner said the Wiesenthal Center would receive a reply within two weeks. When asked whether the German government plans to repudiate the Larijani’s statements, a spokesman deferred the matter to the Foreign Ministry.

The Mideast Freedom Forum Berlin wrote that the invitation of Larijani „is a slap in the face to the Iranian opposition“ and cited Larijani, who as chairman of the Human Rights Staff of Iranian Justice in 2007 defended the practice of stoning Iranians who violated religious law.

A joint statement from the Coordinating Council of German Non-governmental Organizations against anti-Semitism and the German chapter of Scholars for Peace in the Middle East, an organization devoted to countering academic discourse that „demonizes Israel and Zionism,“ said that „a representative of the Hesse Foundation for Peace and Conflict Research (HSFK) voiced regrets that ‚the feelings of some Israeli participants were hurt‘ at the Berlin conference. It is up to German politicians to make clear that what ‚were hurt‘ were not only the ‚feelings of some Israeli participants,‘ but elementary principles of peaceful coexistence and human rights.“

Both organizations demanded „a tightening of economic sanctions against the nuclear armament plans of the anti-Semitic Islamic republic of Iran… German exports to Iran have not decreased in recent months, but have increased considerably.“

A weeklong investigation by the Post indicates that the German government has been intensifying its business and political relations with Iran in 2008. With the exception of 2007, Germany has remained Iran’s No. 1 European Union trade partner over the years. Economists attributed the decline in 2007 to private-sector complications in Iran, and not to German political policy.

In the first quarter of 2008, Iranian-German business mushroomed to €1.35 billion, an 18% increase when compared with the first four months of 2007. Germany supplies a technology-starved Iran with sophisticated equipment for its energy sector and growing infrastructure. Total German export trade to Iran has consistently hovered around €4b. each year.

Merkel has talked about tightening the economic screws on Iran, but her informal policy to discourage trade has not curtailed the strong economic ties between the countries.

Siemens, the electrical giant, maintains a robust yearly trade of between $500m. and $1b. with Iran. The German company Wirth, according to Emanuele Ottolenghi, director of the Transatlantic Institute in Brussels, „sold tunnel-boring equipment to Iran for its Ghomroud water project.“ While such heavy earth-moving machines can be used to build underground nuclear weapons facilities, the German government approved the deal for the machines, which critics consider to be a telling example of „dual-use“ equipment.

Germany’s regulatory agency BAFA is required to block deals involving certain „dual-use“ goods, which can be used for military and civilian purposes. According to terrorism and regulatory experts, Germany has failed to clamp down on the sale of „dual-use“ goods to Iran.