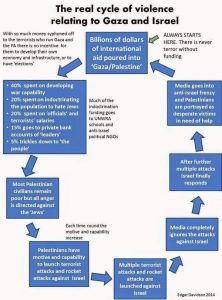 1/9 Given the possibility of another major #Gaza war, I put together a quick reporter’s guide for how to properly cover the #Israeli–#Palestinian conflict. I hope this will be useful not just for rookies but also old hands, who may need a refresher course.

2/9 Reverse chronology and causality. It’s crucial to lead with the #Israeli response and burry somewhere deep in the text the barrage of unprovoked #Palestinian rockets that preceded the response. Under no circumstances must the headline reflect the true course of events.

3/9 Accept unchallenged the #Palestinian casualty figures provided by the #Hamas-run #Gaza Health Ministry. This applies both to the total numbers and those alleged to be civilians. Ignore or shroud in doubt #Israeli estimates, even if later confirmed by Hamas.

4/9 It’s never too early to start throwing around the word “disproportional” in relation to #Israel‘s response or to start treating each alleged #Palestinian casualty as possible evidence of Israeli war crimes.

5/9 In this context it is key to ignore or at least play down a) evidence of #Hamas using its own civilians as human shields and b) unprecedented #Israeli efforts to avoid civilian casualties, which go far beyond the standards of Western armies.

6/9 A special note to photo journalists and TV crews: Please set aside any ethical standards normally guiding your war reporting. Your editors will expect a good number of pornographic close-ups of #Palestinian casualties. You don’t want to disappoint them.

7/9 Try to use intransitive verbs or the passive voice for #Palestinians and the active voice for #Israelis. E.g., “violence broke out at the Gaza border” and “rockets were fired at Israel,” but “Israel strikes targets in Gaza.” You don’t want to assign agency to Palestinians.

8/9 Avoid providing context, such as that #Israel left #Gaza in 2005, that #Hamas violently took over from #Fatah, that the UN’s Palmer Report found Israel’s blockade legal, that even under fire Israel provides for Gazans etc. It just confuses readers and viewers.

9/9 There are other techniques but if you use this template incessantly and hysterically with wall-to-wall coverage, people will eventually draw the right conclusions about the #Jewish state.

All stories by: Daniel Schwammenthal