In a report to Frankfurt Book Fair Director, Jürgen Boos, the Simon Wiesenthal Centre’s Director for International Relations, Dr Shimon Samuels, noted that „this is the sixth year that the Simon Wiesenthal Centre monitors incitement to hate and violence on the display stands of the Frankfurt Book Fair.“
He quoted Boos who characterized this 59th anniversary as „‚promoting international standards, best practices and respect‘ when welcoming Turkey as the Fair’s 2008 Honoured Guest.“
Samuels added that, „at the opening ceremony, Turkish President Abdullah Gül had stated that ‚Turkey stands for harmony, tolerance and pluralism.'“
He expressed his feeling of personal pride that „my grandfather’s former homeland was to present the grandeur of its literary heritage to the world.“
This pride turned to sadness when he found „that moment sullied by the number of antisemitic conspiracy theory volumes on the exhibit shelves of Turkish publishers and even on sale at the official Turkish sales stand in the fairground’s Forum.“ 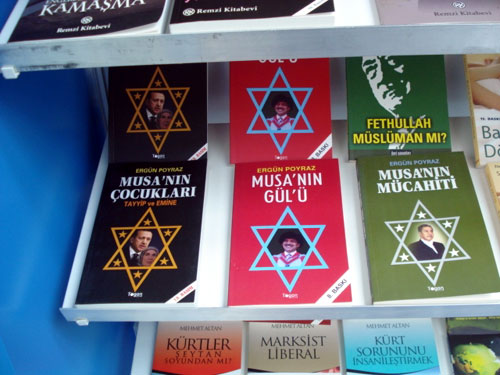 Three books: speculating on the Jewish origins, respectively, of Prime Minister Recep Tayyip Erdogan, President Abdullah Gül, and the founder of their AKP party, Bulent Arinç. Authored by Ergün Pograz, all were publishd in 2007 by Togon, Istanbul (sold at the Forum bookstore at the exit of the Turkish State exhibit). 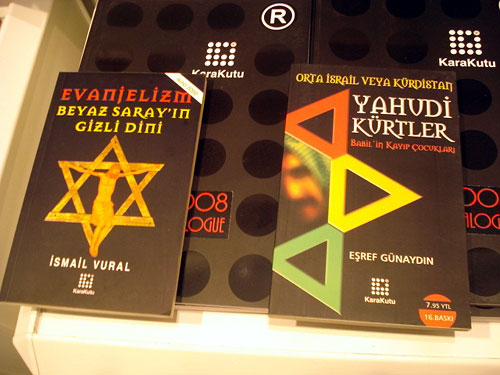 Two books: „Evangelism“ as Jewish control of President Bush, and another on Jewish control of Kurdistan. Authored, respectively, by Ismail Vural and Esref Günaydin, both published in 2007 by Karakutu, Istanbul (on Stand 5.1/C/976/78). 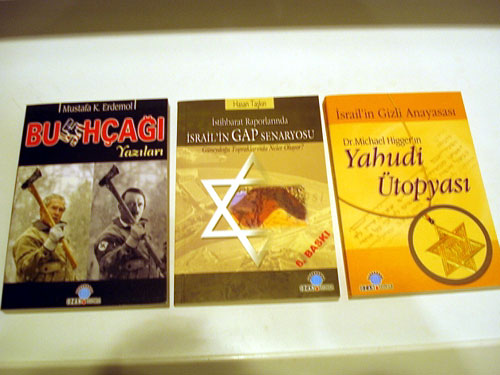 Three volumes: the first on President Bush as a latter-day Hitler, by Mustafa K. Erdomol; the second on Israeli control of Turkey, by Hassan Taplun; the third, entitled „Jewish Utopia“, by „Dr Michael Higgerin“; all published in 2005/2006 by Ozan, Istanbul (on Stand 5.1/C/976/45). 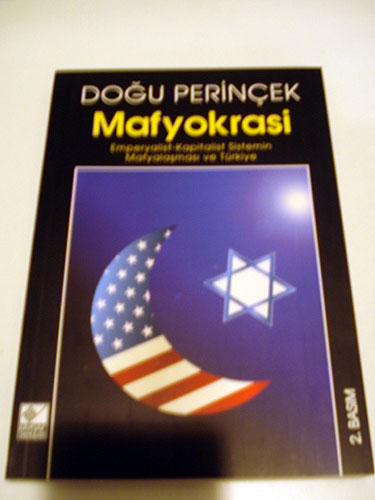 „Mafiocracy: The Imperialist-Capitalist System of the Mafiosi and Turkey“
by Dogu Perinçek, published in 2005 by Kaynak Analiz, Istanbul (on Stand 5.1/C/976/85).

The report pointed out that „it is public knowledge that the Simon Wiesenthal Centre has long championed the integration of Turkey into Europe – a cause acknowledged at a meeting in Ankara with President Gül.“

„Moreover, the Centre has regularly protested whenever Turks were victims of racism in Europe. We expect no less from Ankara and urge the Turkish government to curb the dissemination of antisemitism, consonant with its commitments as a member of the Organization for Security and Cooperation in Europe and its aspirations to membership in the European Union.“

A further section stated that, „as in past years, texts expressing hostility to Jews were also found on the stand of Egyptian publishers, as also the inculcation of a culture of death on the Children’s Literature displays of the Palestinian Territories and of an Iranian publisher of tales for
infants: 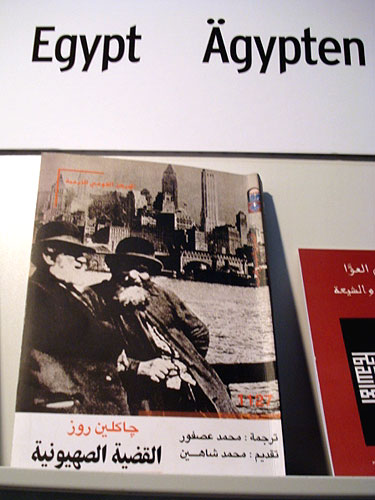 Three children’s readers: ‚The Tattoos on My Daddy‘, ‚Hassani, Where Are You Going?‘, ‚The Birthday Party of Angel of Death‘ – all glorify war and encourage martyrdom, published by Shabaviz, Tehran (on Stand 3.0/J/350). 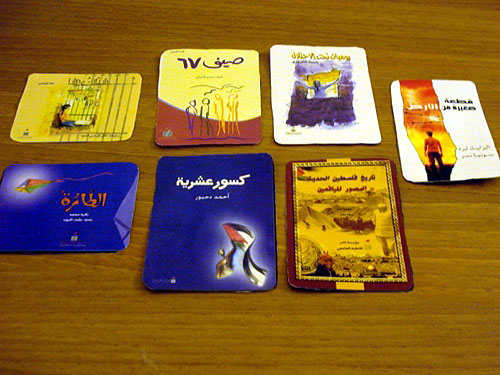 Seven infant primers that extol violence and propagandize the ‚Naqba‘ and ‚Intifada‘ in the name of education: ‚Rasha’s Window‘ by Abia Tubasi; ‚The Airplane‘ by Zakariya Mohammed; ‚Summer 67‘ by Majdi Shomali; ‚Kosor Ashreia‘ (a collection of poems); ‚Travel over Travel‘ by Salman Natour; ‚Palestinian History Book for Youth‘ by Sonia and Saed Nimr; ‚A Little Piece of Ground‘ by Elizabeth Laird and Sonia Nimr; all published by the Tamer Institute for Community Education, Ramallah (on Stand 5.0/E/922).“

Samuels asserted that „the above-mentioned publishers are in violation of their contractual obligations to the Frankfurt Book Fair – among them are chronic annual recidivists.“
„Consequently, our Centre urges you to promptly confiscate these offensive texts and to blacklist the respective exhibitors from participation in the 60th Fair in 2009“, concluded the report.
For further information, please contact Shimon Samuels at +33.609.77.01.58