Frankfurt, 16 October 2012, For the tenth year, the Simon Wiesenthal Centre was the only organization to monitor incitement to hate and violence on the display stands of the Frankfurt Book Fair. With 7,384 exhibits from 100 countries and some 300,000 visitors, this is the largest annual international gathering of the publishing industry.
In a meeting with the Fair’s President, Juergen Boos, the Centre’s Director for International Relations, Dr. Shimon Samuels, praised intervention – based on our reports – against heavily antisemitic literature on Turkish stands two years ago and against last year’s ‚Worst Offender‘, Malaysia. 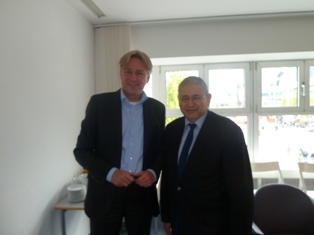 „In 2011, Turkey’s Publishers‘ Association informed that subsequent to our Centre’s protest, Frankfurt authorities had warned exhibitors that display of hate literature illegal in Germany could breach their contracts with the Fair“, noted Samuels, adding his satisfaction that „this year, Turkish and Malaysian stands were hate-free,though Iran had now become the ‚Worst Offender'“.
IRAN
Outside the hall, protesters at three NGO stands expressed support for the opposition with campaign materials on : „No to Sharia and to Martyrdom“, „Stop Stoning Women“, „Close the Iranian Embassy: Terrorist Centre“, „International Committee Against Executions“, „Stop the Bomb“, „Expel Iran from the Book Fair“ 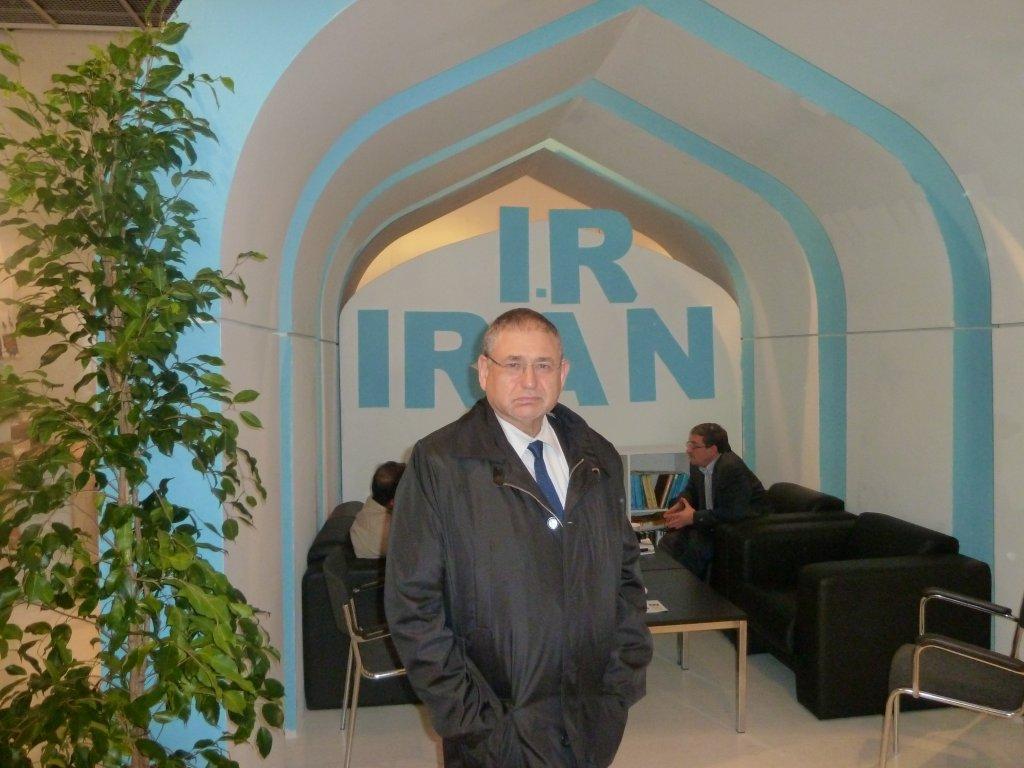 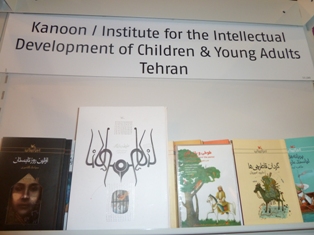 – Similar texts are displayed at the Iranian Institute for the Intellectual Development of Children and Young Adults stand ( 3.0. J 349)
– „If I Were a Pilot“ by Ahmad Akbapour, Elmi-Farhangi Publications, Tehran, 2008
– Elmi Farhangi Publications,stand (5.0. D 905), displayed „If I Were a Bit Older“ by Akhbar Sahraei which glamourizes 13/14 year old volunteers at the frontlines against Iraq 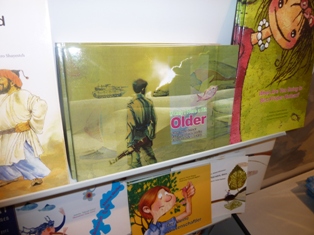 Much more worrying is the Association of Defa Moquaddassah (Holy Defence)Publishers stand (5.0 D 906). This State military consortium – a first timer at the Fair – represents 38 publishers focussing on war, martyrdom and Jihad.
These include :
– „The Fall of Israel“ by Mehdi Hamad, Al-Fatlavi, Bastom Ketab Publisher, Tehran
– „Palestine and the Zionist Regime in View of the Supreme Leader“, Ghadr Velayat, Tehran „The Exchange – Lebanon 2005-2008“,Vahid and Saeed Faraji,Saghi Publishers,Tehran,2011
This lavish photo album,an ode to Hizbollah, was launched last year on Revayat Fath Institute’s stand,and this year went viral on several Iranian displays, including the military Defa Moquadassah.
The volume extols the „heroism of Sami Kuntar and 4 other Hezbollah fighters who were among those exchanged for three Israelis, two of whom were handed over as corpses. It should be noted that Kuntar had slaughtered a family of five slitting the throats of the babies in their cots, exclaiming that this was the fate for all Jews…“, noted Samuels.
The Centre’s report stressed that „such iconization of a monster, in full view of visitors to the Fair, is a whitewash for terrorism that demands a public condemnation of the Iranian authorities and a reevaluation of their future participation in the Fair“
The same book was also featured at the Saghi Publications stand (5.0 D 902) under a poster for the „2nd International Book Award for Resistance, Culture, Literature, Art and Knowledge“ 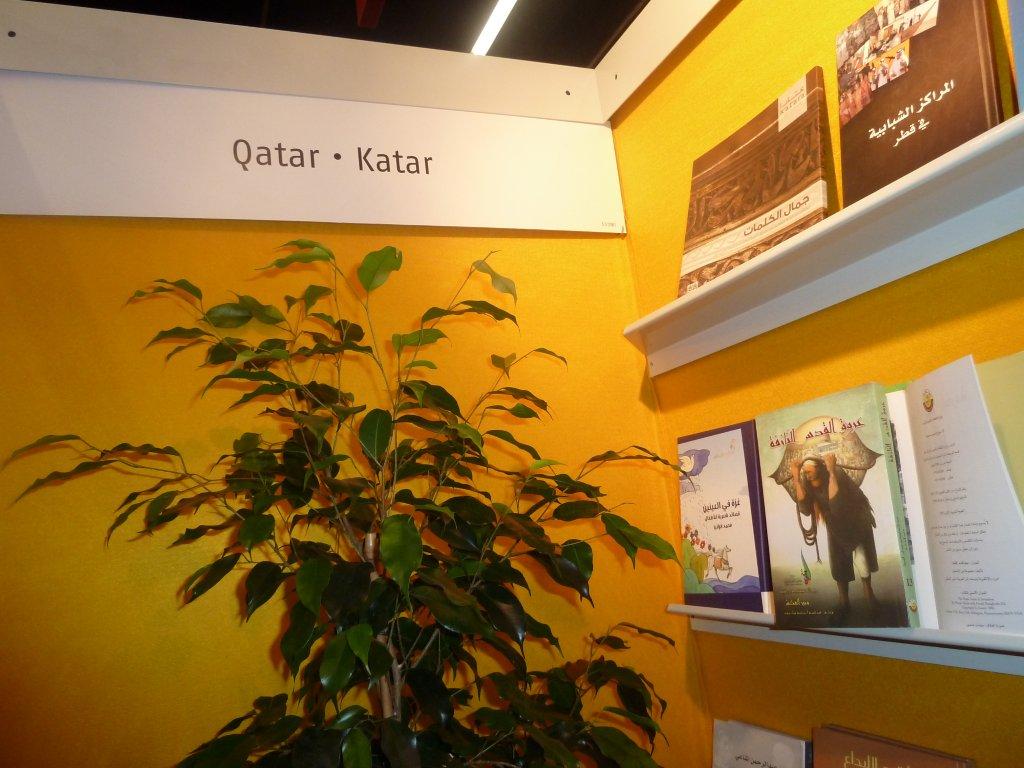 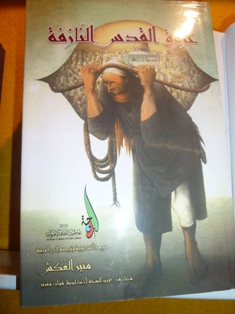 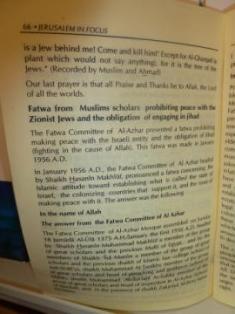 – The Egypt Collective stand (5.0. E 959)
„The Alienation of the Jewish Personality in Modern Hebrew Literature“,
by Ahmad Hammad, General Egyptian Authority for Books, Cairo, discredits the Jewish connection to the Holy Land – Al Ahram Centre, Cairo (5.0. E. 960)
„Pawns on the Chessboard – The Elders of Zion and How Their Sons Manipulate the World“, by Issam Abdul Fatah, Sharif Mus Publishers, 2012. Once again, fictional conspiracy theories are an annual staple of Al Ahram’s display Samuels requested the Fair’s President “ to take measures to blacklist exhibitors, which continually abuse their presence to foment hate.“
„We will consult with the Public Prosecutor in this regard“, responded Boos.
SYRIA
A weird double-take for visitors to the Syrian stand, Atlas for Publishing and Distribution, Damascus ( 5.0 E 985). Its main feature was a poster promoting a book entitled, “ The Dream and then the Nightmare – The Syrians who boarded the Titanic“, prophecy or farce, wondered a passing American publisher. „The role of Frankfurt as the point of reference for regional bookfairs cannot be minimized.Tolerating the intolerable from hatemongering State exhibitors is a passive endorsement for the Tehran Bookfair’s Holocaust denial industry and the Casablanca and Cairo Bookfairs‘ obsessive compulsive displays of world Jewish conspiracies.Ensuring a hate-free Frankfurt Fair would have global impact“, concluded Samuels.
For further information contact Shimon Samuels on +33 (0) 609770158